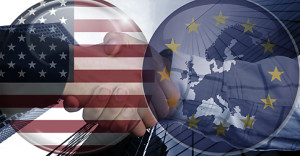 Shortly after the period of grace for transatlantic data transfer for companies expired EU-commission and US-government decided on a renewed data protection agreement. Safe Harbor is now called Privacy Shield.

On the afternoon of February 2nd 2016 the EU-commission announced via Twitter the successful end of months of struggle for an agreement on data transfer from Europe to the USA. EU-commission and US-government agreed on a successor to Safe Harbor which had been declared invalid in October 2015: Safe Harbor will now be followed by Privacy Shield.

The agreement on Privacy Shield brought forth supporters as well as critical point of views, that think that the Safe Harbor follow-up is not going far enough in terms of data protection.

Jan Philipp Albrecht, member of the European Parliament and one of the speakers at European Data Protection Days 2016 emphasized that this agreement is not a signed deal.

Listen carefully: @EU_Commission and US side will need ‘some’ weeks to get this into concrete legal wording. This is no ‘deal’! #safeharbor

Data privacy activist Maximilian Schrems as well thinks that a lot of issues have not been clarified.

STATEMENT on #PrivacyShield / (#SafeHarbor 1.1)
“European Commission may be issuing a round-trip to Luxembourg”
PDF: https://t.co/l9fxBp1T7b

You can read the complete press release by the EU commission on Privacy Shield here.

Following this ground breaking decision Privacy Shield will of course play a key role in key notes, speeches, and discussions of the European Data Protection Days (#EDPD16) in April in Berlin.